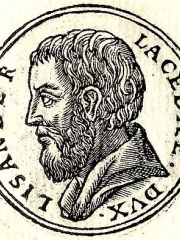 Lysander (; died 395 BC, Doric Greek: Λύσανδρος, romanized: Lýsandros) was a Spartan admiral who commanded the Spartan fleet in the Hellespont which defeated the Athenians at Aegospotami in 405 BC. The following year, he was able to force the Athenians to capitulate, bringing the Peloponnesian War to an end. Read more on Wikipedia

Since 2007, the English Wikipedia page of Lysander has received more than 571,948 page views. His biography is available in 40 different languages on Wikipedia (up from 38 in 2019). Lysander is the 204th most popular military personnel (down from 175th in 2019), the 141st most popular biography from Greece (down from 122nd in 2019) and the 13th most popular Greek Military Personnel.

Lysander is most famous for his victory at the Battle of Aigospotamoi in 405 BC.

Page views of Lysanders by language

Others Deceased in 395 BC