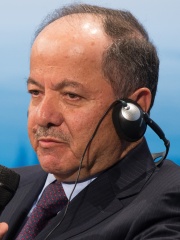 Masoud Barzani (Kurdish: مه‌سعود بارزانی ,Mesûd Barzanî‎; born 16 August 1946) is a Kurdish politician who was President of the Kurdistan Region of Iraq from 2005 to 2017. He is also leader of the Kurdistan Democratic Party (KDP) since 1979. Barzani was born in Mahabad, Imperial State of Iran in the self-declared Republic of Mahabad and succeeded his father Mustafa Barzani as leader of the Kurdistan Democratic Party in 1979.Working closely with his brother Idris Barzani until Idris's death, Barzani and various other Kurdish groups fought the forces of the Iraqi government in Baghdad during the Iran–Iraq War. Read more on Wikipedia

Since 2007, the English Wikipedia page of Masoud Barzani has received more than 456,557 page views. His biography is available in 43 different languages on Wikipedia making him the 2,248th most popular politician.

Among politicians, Masoud Barzani ranks 2,232 out of 14,801. Before him are Maria Christina of Austria, Ivan Gašparovič, Amaziah of Judah, Mentuhotep III, Richard II, Duke of Normandy, and Inge the Elder. After him are Louis IV, Grand Duke of Hesse, Antonio José de Sucre, Isabella Jagiellon, Amyntas III of Macedon, Philipp Scheidemann, and Theudebert I.