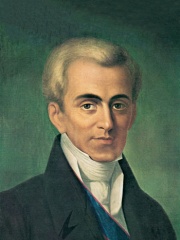 Count Ioannis Antonios Kapodistrias (10 or 11 February 1776 – 9 October 1831), sometimes anglicized as John Capodistrias (Greek: Κόμης Ιωάννης Αντώνιος Καποδίστριας, romanized: Komis Ioannis Antonios Kapodistrias; Russian: граф Иоанн Каподистрия, romanized: Graf Ioann Kapodistriya; Italian: Giovanni Antonio Capodistria, Conte Capo d'Istria), was a Greek statesman who served as the Foreign Minister of the Russian Empire and was one of the most distinguished politicians and diplomats of Europe. After a long and distinguished career in European politics and diplomacy he was elected as the first head of state of independent Greece (1827–31). Read more on Wikipedia

Ioannis Kapodistrias was a Greek diplomat and the first head of state of independent Greece.

Among politicians, Ioannis Kapodistrias ranks 1,844 out of 15,577. Before him are Emperor Hui of Han, Alexios II Komnenos, Teia, Jean Parisot de Valette, Edward the Martyr, and Maumoon Abdul Gayoom. After him are Henry II of Castile, Habibullāh Kalakāni, Francis, Duke of Anjou, Ludvík Svoboda, Baasha of Israel, and Alexios V Doukas.