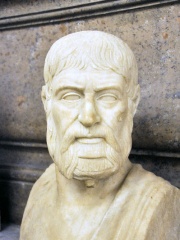 Pausanias (Greek: Παυσανίας; died c. 477 BC ) was a Spartan regent and a general who succeeded his father Cleombrotus who, in turn, succeeded king Leonidas I. In 479 BC, as a leader of the Hellenic League's combined land forces, Pausanias won a pivotal victory in the Battle of Plataea ending the Second Persian invasion of Greece. One year after the victories over Persians and Persian allies, Pausanias fell under suspicion of conspiring with the Persian king, Xerxes I to betray Greeks and died in 477 BC in Sparta starved to death by fellow citizens. Read more on Wikipedia

Pausanias is most famous for his "Description of Greece" which is a peripatetic account of the Greek cities and monuments.

Page views of Pausanias by language