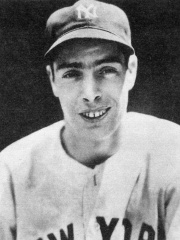 Joseph Paul DiMaggio (November 25, 1914 – March 8, 1999), nicknamed "Joltin' Joe", "The Yankee Clipper" and "Joe D.", was an American baseball center fielder who played his entire 13-year career in Major League Baseball for the New York Yankees. Born to Sicilian immigrants in California, he is widely considered one of the greatest baseball players of all time, and is best known for setting the record for the longest hitting streak in baseball (56 games from May 15 – July 16, 1941), which still stands.DiMaggio was a three-time Most Valuable Player Award winner and an All-Star in each of his 13 seasons. During his tenure with the Yankees, the club won ten American League pennants and nine World Series championships. Read more on Wikipedia

Joe DiMaggio is most famous for being a member of the New York Yankees and for his 56-game hitting streak in 1941.