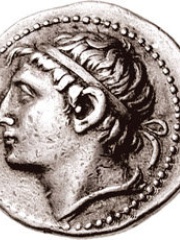 Cleomenes III (Ancient Greek: Κλεομένης) was one of the two kings of Sparta from 235 to 222 BC. He was a member of the Agiad dynasty and succeeded his father, Leonidas II. He is known for his attempts to reform the Spartan state. From 229 to 222 BC, Cleomenes waged war against the Achaean League under Aratus of Sicyon. After being defeated by the Achaeans in the Battle of Sellasia in 222 BC, he fled to Ptolemaic Egypt. Read more on Wikipedia

Cleomenes III was king of Sparta from 235 to 222 BC. He is most famous for his reforms in the Spartan army and his victory against the Achaean League in the Battle of Sellasia in 222 BC.

Among politicians, Cleomenes III ranks 2,095 out of 15,710. Before him are Vittorio Emanuele, Prince of Naples, Choi Kyu-hah, Andrew I of Hungary, Sweyn II of Denmark, Maria Anna of Bavaria, and Empress Wanrong. After him are Wallia, Maria Mandl, George Curzon, 1st Marquess Curzon of Kedleston, Aeschines, Paul Biya, and Nexhmije Hoxha.

Others Deceased in 219 BC