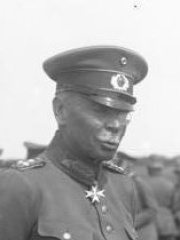 Johannes "Hans" Friedrich Leopold von Seeckt (22 April 1866 – 27 December 1936) was a German military officer who served as Chief of Staff to August von Mackensen and was a central figure in planning the victories Mackensen achieved for Germany in the east during the First World War. During the years of the Weimar Republic he was chief of staff for the Reichswehr from 1919 to 1920 and commander in chief of the German Army from 1920 until he resigned in October 1926. During this period he engaged in the reorganization of the army and laid the foundation for the doctrine, tactics, organization, and training of the German army. Read more on Wikipedia

Hans von seeckt was a German general and military theorist. He is most famous for his work in rebuilding the German army after World War I, and for his work in developing the blitzkrieg tactic.