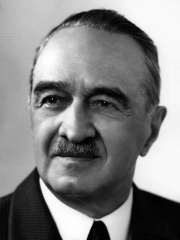 Anastas Ivanovich Mikoyan (English: ; Russian: Анаста́с Ива́нович Микоя́н; Armenian: Անաստաս Հովհաննեսի Միկոյան; 25 November 1895 – 21 October 1978) was an Armenian Communist revolutionary, Old Bolshevik and Soviet statesman during the mandates of Lenin, Stalin, Khrushchev and Brezhnev. He was the only Soviet politician who managed to remain at the highest levels of power within the Communist Party of the Soviet Union, as that power oscillated between the Central Committee and the Politburo, from the latter days of Lenin's rule, throughout the eras of Stalin and Khrushchev, until his peaceful retirement after the first months of Brezhnev's rule. Mikoyan became an early convert to the Bolshevik cause. Read more on Wikipedia

Since 2007, the English Wikipedia page of Anastas Mikoyan has received more than 569,759 page views. His biography is available in 47 different languages on Wikipedia making him the 1,445th most popular politician.

Among politicians, Anastas Mikoyan ranks 1,438 out of 14,801. Before him are Ehud Olmert, Pauline Bonaparte, John Tyler, Emperor Taizu of Song, Vasili IV of Russia, and Elisa Bonaparte. After him are Ælla of Northumbria, Mayer Amschel Rothschild, Khalid of Saudi Arabia, Jiajing Emperor, Ehud Barak, and Rutherford B. Hayes.