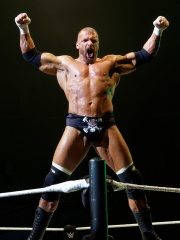 Paul Michael Levesque (born July 27, 1969), better known by the ring name Triple H, is an American professional wrestler, business executive, and actor. He is currently signed to WWE and is the Executive Vice President of Global Talent Strategy & Development of WWE. He is also creator and executive producer of the WWE brand NXT. Born and raised in Nashua, New Hampshire, Triple H began his professional wrestling training from 1990-1991 and his career from 1992-1993 with the International Wrestling Federation (IWF) under the ring name Terra Ryzing. He joined World Championship Wrestling (WCW) from 1994-1995 and was repackaged as a French-Canadian aristocrat named Jean-Paul Lévesque, and was later repackaged in 1995 when he signed with the World Wrestling Federation (WWF, now WWE), where he became Hunter Hearst Helmsley, and later, Triple H.In WWF, Triple H gained industry fame after co-founding the influential D-Generation X stable, which became a major element of the "Attitude Era" in the 1990s. Read more on Wikipedia