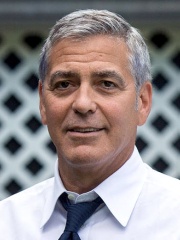 George Timothy Clooney (born May 6, 1961) is an American actor and filmmaker. He is the recipient of numerous accolades, including a British Academy Film Award, four Golden Globe Awards, four Screen Actors Guild Awards, and two Academy Awards, one for his acting and the other as a producer. In 2018, he was the recipient of the AFI Life Achievement Award.Clooney started his career in television, gaining wide recognition in his role as Dr. Read more on Wikipedia

George Clooney is most famous for his role as Dr. Doug Ross on the NBC medical drama ER.

Yahoo Entertainment
George Clooney says he and wife Amal made a 'terrible mistake' by having their twins learn Italian
George Clooney joked that he and his wife Amal made a "big mistake" by having their children learn Italian. The couple share 5-year-old twins Alexander and...
Ashley Hume
TMZ
George And Amal Clooney Host Albie Awards, Star-Studded Event
George and Amal Clooney brought out some of their most famous friends in NYC to christen a new award show ... with guests including Michelle Obama, Drew Barrymore, Cindy Crawford and more. The star-studded event went down Thursday at New York…
TMZ Staff
Just Jared
George Clooney Was Joined by Dozens of A-List Celebs at Clooney Foundation Awards - See Every Photo!
George Clooney and his wife Amal Clooney were joined by dozens of celebrity friends at the first-ever Albie Awards! The power couple hosted the event in support of The Clooney Foundation for Justice on Thursday night (September 29) at the New York Public Libr…
Just Jared
Independent
George Clooney gushes about wife Amal at their first Albie Awards: ‘Couldn’t be more proud’
The couple’s Clooney Foundation for Justice recognised journalists, lawyers and rights groups
Kate Ng