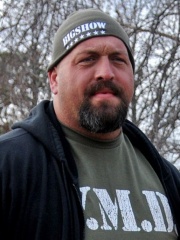 Paul Donald Wight II (born February 8, 1972) is an American professional wrestler and actor. He is signed to All Elite Wrestling (AEW) as an in-ring performer, and as a commentator for its web television show, AEW Dark: Elevation, under his real name of Paul Wight. Read more on Wikipedia

The Super Bowl is the most famous show for football in the United States. It is the championship game for the National Football League (NFL).

Among wrestlers, Big Show ranks 5 out of 703. Before him are Hulk Hogan, The French Angel, André the Giant, and Kane. After him are Masahiko Kimura, Antonio Inoki, John Cena, Anton Geesink, Bruno Sammartino, The Undertaker, and Ric Flair.