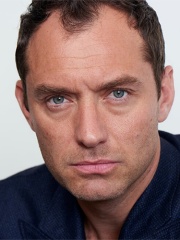 David Jude Heyworth Law (born 29 December 1972) is an English actor. He has received multiple awards including a BAFTA Film Award as well as nominations for two Academy Awards, four Golden Globe Awards, three Laurence Olivier Awards, and two Tony Awards. In 2007, he received an Honorary César and was named a knight of the Order of Arts and Letters by the French government, in recognition of his contribution to World Cinema Arts.Born and raised in London, Law started acting in theatre. Read more on Wikipedia

Since 2007, the English Wikipedia page of Jude Law has received more than 12,326,820 page views. His biography is available in 68 different languages on Wikipedia making him the 500th most popular actor.