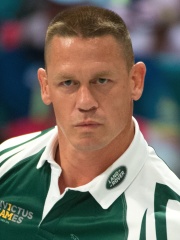 John Felix Anthony Cena (; born April 23, 1977) is an American professional wrestler, actor, television presenter, and former rapper currently signed to WWE. Widely regarded as one of the greatest professional wrestlers of all time, he is tied with Ric Flair for the most world championship reigns in pro wrestling history.Born and raised in West Newbury, Massachusetts, Cena moved to California in 1998 to pursue a career as a bodybuilder. He transitioned to professional wrestling in 1999 when he debuted for Ultimate Pro Wrestling (UPW). He signed with the World Wrestling Federation (WWF, now WWE) in 2001, where he was initially assigned to Ohio Valley Wrestling (OVW). Read more on Wikipedia

Since 2007, the English Wikipedia page of John Cena has received more than 38,786,523 page views. His biography is available in 77 different languages on Wikipedia (up from 74 in 2019). John Cena is the 8th most popular wrestler, the 1,574th most popular biography from United States (up from 1,851st in 2019) and the 3rd most popular American Wrestler.

Among wrestlers, John Cena ranks 8 out of 703. Before him are The French Angel, André the Giant, Kane, Big Show, Masahiko Kimura, and Antonio Inoki. After him are Anton Geesink, Bruno Sammartino, The Undertaker, Ric Flair, Isao Inokuma, and Aleksandr Karelin.