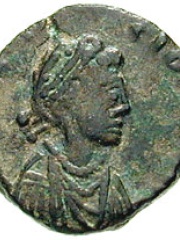 Galla Placidia (388-89 / 392-93 – 27 November 450), daughter of the Roman emperor Theodosius I, was a mother, tutor, and advisor to emperor Valentinian III, and a major force in Roman politics for most of her life. Read more on Wikipedia

Galla Placidia was the daughter of Theodosius I and sister of Honorius. She was married to Atilla the Hun, with whom she had a son. When her brother Honorius died, she became regent for her young son Valentinian III. She was a devout Christian and restored many churches and monasteries.

Among politicians, Galla Placidia ranks 915 out of 15,710. Before her are Archduke Karl Ludwig of Austria, Benjamin Disraeli, Mindaugas, Maximilian I Joseph of Bavaria, Rehoboam, and Lysimachus. After her are Ptolemy XII Auletes, Alfonso XII of Spain, Vasili IV of Russia, Bashar al-Assad, Haakon VII of Norway, and Amenhotep I.