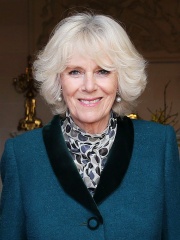 Camilla (born Camilla Rosemary Shand, later Parker Bowles; 17 July 1947) is Queen of the United Kingdom and the 14 other Commonwealth realms as the wife of King Charles III. Camilla became queen consort on 8 September 2022, upon the accession of her husband following the death of his mother, Queen Elizabeth II.Camilla was raised in East Sussex and South Kensington in England and educated in England, Switzerland, and France. In 1973, she married British Army officer Andrew Parker Bowles; they divorced in 1995. Camilla and Charles were romantically involved periodically both before and during each of their first marriages. Read more on Wikipedia

Camilla, Duchess of Cornwall is most famous for being married to Prince Charles, heir to the British throne.

Page views of Camilla, Duchess of Cornwalls by language

Among noblemen, Camilla, Duchess of Cornwall ranks 61 out of 842. Before her are Elizabeth Charlotte, Madame Palatine, Charles, Count of Valois, Lady Jane Grey, Jeanne d'Albret, Archduke Charles, Duke of Teschen, and Grand Duchess Maria Nikolaevna of Russia. After her are Fatma Sultan, Herodias, Empress Matilda, Olga of Kiev, Afonso de Albuquerque, and Princess Märtha of Sweden.