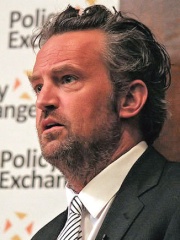 Matthew Langford Perry (born August 19, 1969) is an Canadian-American actor, executive producer and comedian best known for playing the role of Chandler Bing on the NBC television sitcom Friends, which ran from 1994 to 2004. Due to the immense popularity of the sitcom, Perry and the rest of the six-member main cast ensemble were each making $1 million per episode by 2002. Along with starring in the short-lived television series Studio 60 on the Sunset Strip, Perry has appeared in a number of films, including Fools Rush In (1997), Almost Heroes (1998), The Whole Nine Yards (2000), and 17 Again (2009). Read more on Wikipedia

Matthew Perry is most famous for his role as Chandler Bing on the popular sitcom Friends.