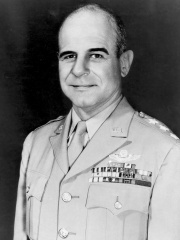 James Harold Doolittle (December 14, 1896 – September 27, 1993) was an American military general and aviation pioneer. He made early coast-to-coast flights, won many flying races, and helped develop instrument flying.Doolittle studied as an undergraduate at University of California, Berkeley, graduating with a Bachelor of Arts in 1922 and earning a doctorate in aeronautics from the Massachusetts Institute of Technology in 1925. He was a flying instructor during World War I and a Reserve officer in the United States Army Air Corps, but he was recalled to active duty during World War II. He was awarded the Medal of Honor for personal valor and leadership as commander of the Doolittle Raid, a bold long-range retaliatory air raid on some of the Japanese main islands on April 18, 1942, four months after the attack on Pearl Harbor. Read more on Wikipedia

Since 2007, the English Wikipedia page of Jimmy Doolittle has received more than 1,725,864 page views. His biography is available in 24 different languages on Wikipedia making him the 103rd most popular engineer.