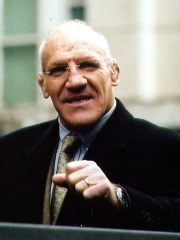 Bruno Leopoldo Francesco Sammartino (October 6, 1935 – April 18, 2018) was an Italian-American professional wrestler, best known for his work with the World Wide Wrestling Federation (WWWF, now WWE). There, he held the WWWF World Heavyweight Championship (WWWF Heavyweight Championship during his second reign) for more than 11 years (4,040 days) across two reigns, the first of which is the longest single reign in the promotion's history at 2,803 days. Dubbed "The Italian Strongman" and "The Strongest Man in the World" early in his career, Sammartino later earned the title "The Living Legend". Read more on Wikipedia

Since 2007, the English Wikipedia page of Bruno Sammartino has received more than 2,750,416 page views. His biography is available in 23 different languages on Wikipedia making him the 16th most popular wrestler.

Among wrestlers, Bruno Sammartino ranks 16 out of 562. Before him are Dave Bautista, The Undertaker, Ric Flair, El Santo, Rikidōzan, and Aleksandr Karelin. After him are Ivan Poddubny, Aleksandr Medved, Triple H, The Miz, Stone Cold Steve Austin, and Darren Young.

Among WRESTLERS In Italy