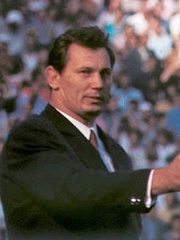 Aleksandr Vasiliyevich Medved (born 16 September 1937) is a Ukrainian-born Soviet Belarusian retired freestyle wrestler who competed for the Soviet Union and was named "one of the greatest wrestlers in history" by FILA, the sport's governing body. Between 1962 and 1972 he won three Olympic gold medals, seven world and three European titles. Read more on Wikipedia

Among wrestlers, Aleksandr Medved ranks 14 out of 700. Before him are Antonio Inoki, Anton Geesink, Dave Bautista, Chyna, Rocky Johnson, and The Undertaker. After him are Ric Flair, Ivan Poddubny, Bruno Sammartino, Rikidōzan, Khabib Nurmagomedov, and Isao Inokuma.

Among WRESTLERS In Ukraine