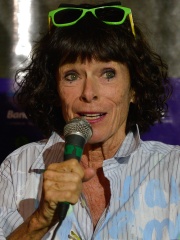 Geraldine Leigh Chaplin (born July 31, 1944) is an English-American actress. She is the daughter of Charlie Chaplin, the first of eight children with fourth wife Oona O'Neill. After beginnings in dance and modelling, she turned her attention to acting, and made her English-language acting debut (and came to prominence in what would be a Golden Globe-nominated role) in her portrayal of Tonya in David Lean's Doctor Zhivago (1965). Read more on Wikipedia

Since 2007, the English Wikipedia page of Geraldine Chaplin has received more than 3,678,924 page views. Her biography is available in 41 different languages on Wikipedia making her the 201st most popular actor.