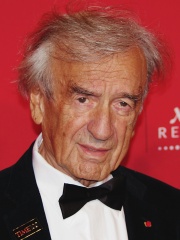 Elie Wiesel (, born Eliezer Wiesel Hebrew: אֱלִיעֶזֶר וִיזֶל‎ ʾÉlīʿezer Vīzel; September 30, 1928 – July 2, 2016) was a Romanian-born American writer, professor, political activist, Nobel laureate, and Holocaust survivor. He authored 57 books, written mostly in French and English, including Night, a work based on his experiences as a Jewish prisoner in the Auschwitz and Buchenwald concentration camps.He was a professor of the humanities at Boston University, which created the Elie Wiesel Center for Jewish Studies in his honor. He was involved with Jewish causes and human rights causes and helped establish the United States Holocaust Memorial Museum in Washington, D. C. In his political activities, he also campaigned for victims of oppression in places like South Africa, Nicaragua, Kosovo, and Sudan. Read more on Wikipedia

Elie Wiesel is most famous for his book Night, which is about his experience in the Holocaust.