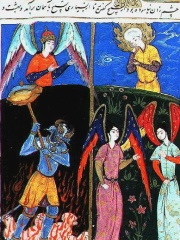 ʾIdrīs (Arabic: إدريس‎) is an ancient prophet mentioned in the Quran, whom Muslims believe was the third prophet after Seth. He is the second prophet mentioned in the Quran. Islamic tradition has unanimously identified Idris with the biblical Enoch, although many Muslim scholars of the classical and medieval periods also held that Idris and Hermes Trismegistus were the same person.He is described in the Quran as "trustworthy" and "patient" and the Quran also says that he was "exalted to a high station". Read more on Wikipedia

Page views of Idrises by language

Among people born in 3500 BC, Idris ranks 3. Before him are Rachel and Bathsheba. After him are Scorpion II, Scorpion I, Tiu, Wazner, Khayu, Mekh, and Neheb.