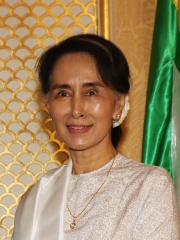 Aung San Suu Kyi (; Burmese: အောင်ဆန်းစုကြည်; MLCTS: aung hcan: cu. krany Burmese pronunciation: [àʊɰ̃ sʰáɰ̃ sṵ tɕì]; born 19 June 1945) is a Burmese politician, diplomat, author, and a 1991 Nobel Peace Prize laureate who served as State Counsellor of Myanmar (equivalent to a prime minister) and Minister of Foreign Affairs from 2016 to 2021. She has served as the chairperson of the National League for Democracy (NLD) since 2011, having been the general secretary from 1988 to 2011. Read more on Wikipedia

Aung San Suu Kyi is most famous for her fight for democracy in Myanmar. She was imprisoned in 1989, but was released in 2010. She was awarded the Nobel Peace Prize in 1991.

Among SOCIAL ACTIVISTS In Myanmar (Burma)