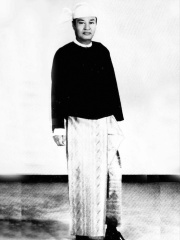 Ne Win (Burmese: နေဝင်း IPA: [nè wɪ́ɰ̃]; 10 July 1910, or 14 or 24 May 1911 – 5 December 2002) was a Burmese politician and military commander who served as Prime Minister of Burma from 1958 to 1960 and 1962 to 1974, and also President of Burma from 1962 to 1981. Ne Win was Burma's military dictator during the Socialist Burma period of 1962 to 1988.Ne Win founded the Burma Socialist Programme Party (BSPP) and overthrew the democratic Union Parliament of U Nu in the 1962 Burmese coup d'état, establishing Burma as a one-party socialist state under the Burmese Way to Socialism ideology. Ne Win was Burma's de facto leader as chairman of the BSPP, serving in various official titles as part of his military government, and was known by his supporters as U Ne Win. Read more on Wikipedia

Ne Win was a general in the Burmese army and was the Prime Minister of Burma from 1962 to 1988. He is most famous for his "Burmese Way to Socialism" which was a series of economic and social reforms that were designed to move Burma from a capitalist economy to a socialist economy.

Among politicians, Ne Win ranks 3,452 out of 15,577. Before him are Bruno Kreisky, Jill Biden, Kyösti Kallio, Aleksandar Vučić, Yury of Moscow, and Charles I Gonzaga, Duke of Mantua. After him are Louis I of Etruria, Kåre Willoch, Antonio I, Prince of Monaco, Sigeric, Ernst vom Rath, and Paul Deschanel.