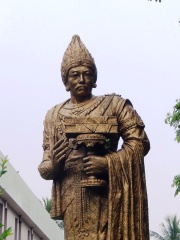 Anawrahta Minsaw (Burmese: အနော်ရထာ မင်းစော, pronounced [ʔənɔ̀jətʰà mɪ́ɰ̃ sɔ́]; 11 May 1014 – 11 April 1077) was the founder of the Pagan Empire. Considered the father of the Burmese nation, Anawrahta turned a small principality in the dry zone of Upper Burma into the first Burmese Empire that formed the basis of modern-day Burma (Myanmar). Historically verifiable Burmese history begins with his accession to the Pagan throne in 1044.Anawrahta unified the entire Irrawaddy valley for the first time in history, and placed peripheral regions such as the Shan States and Arakan (Rakhine) under Pagan's suzerainty. Read more on Wikipedia

Page views of Anawrahtas by language

Among politicians, Anawrahta ranks 4,544 out of 15,710. Before him are László Sólyom, Sten Sture the Younger, Gunther, Josef Bühler, Gaston Thorn, and Ricardo Lagos. After him are Hetepheres II, Giovanni Sforza, Frederick II, Elector of Brandenburg, Rudolf Brandt, Julia Flavia, and Theobald II of Navarre.

Among people born in 1015, Anawrahta ranks 3. Before him are Harald Hardrada and Michael V Kalaphates. After him are Eustace II, Count of Boulogne, John Komnenos, and Ermesinda of Bigorre. Among people deceased in 1077, Anawrahta ranks 3. Before him are Géza I of Hungary and Agnes of Poitou. After him are Sviatoslav II of Kiev, Andronikos Doukas, Zhang Zai, and Abu'l-Fadl Bayhaqi.