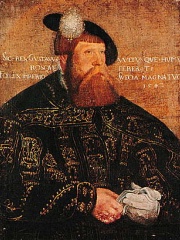 Gustav I of Sweden

Gustav I, born Gustav Eriksson of the Vasa noble family and later known as Gustav Vasa (12 May 1496 – 29 September 1560), was King of Sweden from 1523 until his death in 1560, previously self-recognised Protector of the Realm (Riksföreståndare) from 1521, during the ongoing Swedish War of Liberation against King Christian II of Denmark, Norway and Sweden. Gustav rose to lead the rebel movement following the Stockholm Bloodbath, where his father was executed. Gustav's election as king on 6 June 1523 and his triumphant entry into Stockholm eleven days later marked Sweden's final secession from the Kalmar Union.As king, Gustav proved an energetic administrator with a ruthless streak not inferior to his predecessor's, brutally suppressing subsequent uprisings (three in Dalarna – which had once been the first region to support his claim to the throne – one in Västergötland, and one in Småland). Read more on Wikipedia

Since 2007, the English Wikipedia page of Gustav I of Sweden has received more than 544,296 page views. His biography is available in 61 different languages on Wikipedia making him the 18th most popular social activist.

Page views of Gustav I of Swedens by language

Among SOCIAL ACTIVISTS In Sweden