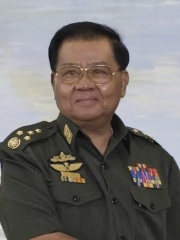 Than Shwe (Burmese: သန်းရွှေ, pronounced [θáɰ̃ ʃwè]; born 2 February 1933 or 3 May 1935) is a Burmese strongman politician who was the head of state of Myanmar from 1992 to 2011 as Chairman of the State Peace and Development Council (SPDC). During this period, he held key positions of power including Prime Minister of Myanmar, Commander-in-chief of Myanmar Defense Services and head of the Union Solidarity and Development Association. In March 2011 he officially stepped down as head of state in favour of his hand-picked successor, Thein Sein, and as head of the Armed Forces, being replaced by general Min Aung Hlaing. Read more on Wikipedia

Since 2007, the English Wikipedia page of Than Shwe has received more than 522,423 page views. His biography is available in 43 different languages on Wikipedia. Than Shwe is the 3,252nd most popular politician (down from 3,070th in 2019), the 4th most popular biography from Myanmar (Burma) and the 3rd most popular Politician.

Than Shwe is most famous for being the former dictator of Myanmar.

Page views of Than Shwes by language

Among politicians, Than Shwe ranks 3,252 out of 15,577. Before him are Henriette of France, Gordon Brown, William X, Duke of Aquitaine, Frederick, Hereditary Prince of Denmark, Princess Marianne of the Netherlands, and Othniel. After him are Shallum of Israel, Igor Smirnov, Thrasamund, Liuvigild, Olympia Mancini, Countess of Soissons, and Olga Nikolaevna of Russia.