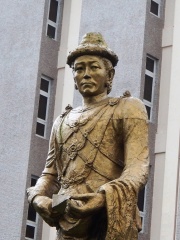 Alaungpaya (Burmese: အလောင်းဘုရား, pronounced [ʔəláʊɰ̃ pʰəjá]; also spelled Alaunghpaya or Alaung-Phra; 24 August [O.S. 13 August] 1714 – 11 May 1760) was the founder of the Konbaung Dynasty of Burma (Myanmar). By the time of his death from illness during his campaign in Siam, this former chief of a small village in Upper Burma had unified Burma, subdued Manipur, conquered Lan Na and defeated the French and the British who had given help to the Restored Hanthawaddy Kingdom. Read more on Wikipedia

Page views of Alaungpayas by language

Among politicians, Alaungpaya ranks 4,634 out of 15,710. Before him are Princess Alexandrine of Prussia, Charles III Philip, Elector Palatine, Izzat Ibrahim al-Douri, Batbayan, Emperor Ninken, and Attalus. After him are Empress Kōgyoku, Louise Hippolyte, Princess of Monaco, Kaykhusraw II, Per Albin Hansson, Louis François, Prince of Conti, and García Sánchez II of Pamplona.

Among people born in 1714, Alaungpaya ranks 10. Before him are Étienne Bonnot de Condillac, Joseph I of Portugal, Claude Joseph Vernet, Niccolò Jommelli, Nikolaus I, Prince Esterházy, and Pontiac. After him are Duke Anthony Ulrich of Brunswick, Jean-Baptiste Pigalle, George Whitefield, Kristijonas Donelaitis, Princess Friederike Luise of Prussia, and Richard Wilson. Among people deceased in 1760, Alaungpaya ranks 7. Before him are George II of Great Britain, Anna Magdalena Bach, Maria Amalia of Saxony, Baal Shem Tov, Joanna Elisabeth of Holstein-Gottorp, and Nicolaus Zinzendorf. After him are Christoph Graupner, William VIII, Landgrave of Hesse-Kassel, and George Clifford III.