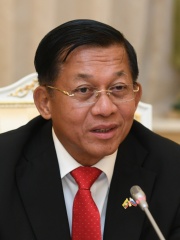 Min Aung Hlaing (Burmese: မင်းအောင်လှိုင် abbreviated: MAL pronounced [mɪ́ɰ̃ àʊɰ̃ l̥àɪɰ̃]; born 3 July 1956) is a Burmese politician and army general who has ruled Myanmar as the chairman of the State Administration Council since seizing power in the February 2021 coup d'état. He took the nominally civilian role of prime minister of Myanmar in August 2021 upon the formation of the Provisional Government. He has also been the commander-in-chief of Defence Services since March 2011. Read more on Wikipedia

Among politicians, Min Aung Hlaing ranks 5,345 out of 15,577. Before him are Tiridates I of Armenia, Kurt von Hammerstein-Equord, Birsa Munda, Fu Hao, Wanyan Liang, and Henry III, Margrave of Meissen. After him are Siemowit, Vladislaus I, Duke of Bohemia, Eleanor de Guzmán, Borrell II, Count of Barcelona, Antilochus, and Sergei Ivanov.