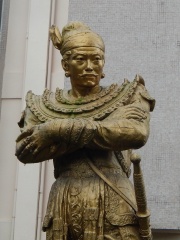 Bayinnaung Kyawhtin Nawrahta (Burmese: ဘုရင့်နောင် ကျော်ထင်နော်ရထာ [bəjɪ̰ɰ̃ nàʊɰ̃ tɕɔ̀ tʰɪ̀ɰ̃ nɔ̀jətʰà]; Thai: บุเรงนองกะยอดินนรธา, RTGS: Burengnong Kayodin Noratha listen ; 16 January 1516 – 10 October 1581) was king of the Toungoo Dynasty of Myanmar from 1550 to 1581. During his 31-year reign, which has been called the "greatest explosion of human energy ever seen in Burma", Bayinnaung assembled what was probably the largest empire in the history of Southeast Asia, which included much of modern-day Myanmar, the Chinese Shan states, Lan Na, Lan Xang, Manipur and Siam.Although he is best remembered for his empire building, Bayinnaung's greatest legacy was his integration of the Shan states into the Irrawaddy Valley-based kingdoms. After the conquest of the Shan states in 1557–1563, the king put in an administrative system that reduced the power of hereditary Shan saophas, and brought Shan customs in line with lowland norms. Read more on Wikipedia

Bayinnaung is most famous for his conquest of Ayutthaya, the capital of the Kingdom of Siam.

Page views of Bayinnaungs by language

Among politicians, Bayinnaung ranks 3,706 out of 15,577. Before him are Marcus Claudius Marcellus, Ziusudra, Ghazi of Iraq, Emil Jellinek, Menander I, and Johann Wilhelm, Elector Palatine. After him are James Brooke, Agnes of France, Byzantine Empress, Nicholas Francis, Duke of Lorraine, Al-Wathiq, Erhard Heiden, and Labarna I.

Among people born in 1516, Bayinnaung ranks 3. Before him are Mary I of England and Conrad Gessner. After him are Margaret Leijonhufvud, Hieronymus Wolf, William, Duke of Jülich-Cleves-Berg, Cristóvão da Gama, Henry Howard, Earl of Surrey, Realdo Colombo, Tabinshwehti, Matthew Stewart, 4th Earl of Lennox, and Söyembikä of Kazan. Among people deceased in 1581, Bayinnaung ranks 2. Before him is Mahidevran. After him are Tsarevich Ivan Ivanovich of Russia, Guru Ram Das, Christopher Báthory, Maria of Austria, Duchess of Jülich-Cleves-Berg, Guillaume Postel, Francis I, Duke of Saxe-Lauenburg, Honoré I, Lord of Monaco, and Edmund Campion.