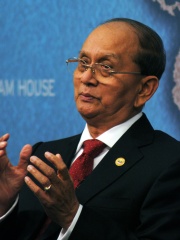 Thein Sein (Burmese: သိန်းစိန်; IPA: [θéɪɰ̃ sèɪɰ̃]; born 20 April 1944) is a Burmese politician and retired general in the Myanmar Army who served as the eighth President of Myanmar from 2011 to 2016. He previously served as Prime Minister from 2007 to 2010, and is considered by many in and outside Myanmar as a reformist leader in the post-junta government.His government undertook a series of political reforms including some deregulation of the country's censored media, releasing many political prisoners and halting the country's controversial large Chinese-led hydro-power project. Read more on Wikipedia

Since 2007, the English Wikipedia page of Thein Sein has received more than 553,170 page views. His biography is available in 49 different languages on Wikipedia. Thein Sein is the 3,763rd most popular politician (up from 4,146th in 2019), the 8th most popular biography from Myanmar (Burma) and the 6th most popular Politician.

The Eiffel Tower is most famous for being the tallest structure in Paris.

Among politicians, Thein Sein ranks 3,763 out of 15,577. Before him are Charles, Grand Duke of Baden, Louise Marie Thérèse of Artois, Florian Geyer, Pribina, Albert I, Duke of Bavaria, and Philip Noel-Baker. After him are Procopius, Al-Aziz Uthman, Radomir Putnik, Mathieu Kérékou, Ma Teng, and Tokugawa Tsunayoshi.