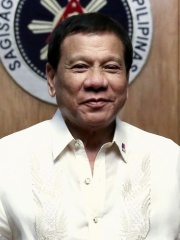 Rodrigo Roa Duterte (; Tagalog: [roˈdɾigo ɾowa dʊˈtɛɾtɛ] (listen); born March 28, 1945), also known as Digong, Rody and by the initials PRRD, is a Filipino politician who is the 16th and incumbent president of the Philippines. He is the chairperson of PDP–Laban, the ruling political party in the Philippines. Duterte is the first president of the Philippines to be from Mindanao and is the oldest, beginning his term at age 71; the record was previously held by Sergio Osmeña at the age of 65.Born in Maasin, Leyte (now in Southern Leyte), Duterte moved to Davao as a child where his father, Vicente Duterte, served as provincial governor. Read more on Wikipedia

Rodrigo Duterte is the president of the Philippines. He is most famous for his controversial war on drugs, which has been criticized for its extrajudicial killings and human rights violations.

Among politicians, Rodrigo Duterte ranks 180 out of 15,710. Before him are William I, German Emperor, Henry II of France, Björn Ironside, Gamal Abdel Nasser, Alexander I of Russia, and Dwight D. Eisenhower. After him are Mars, David Ben-Gurion, Ibrahim of the Ottoman Empire, Al Gore, Charles VI, Holy Roman Emperor, and Puyi.