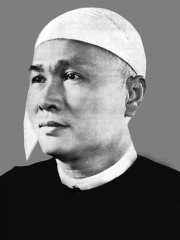 U Nu is most famous for his leadership during the first period of parliamentary democracy in Burma. He was a founding member of the Anti-Fascist People's Freedom League, which became the Burmese Communist Party. He was also the first Prime Minister of Burma and served from 1948 to 1962.

Page views of U Nus by language

Among politicians, U Nu ranks 3,514 out of 15,710. Before him are Sumu-abum, Emperor Ōgimachi, David Cameron, Ferhat Abbas, Emperor Zhang of Han, and Margaret of Savoy, Vicereine of Portugal. After him are Othniel, Lionel Jospin, Urukagina, Hayme Hatun, Henry II, Duke of Austria, and Harvey Milk.

Among people born in 1907, U Nu ranks 54. Before him are H. L. A. Hart, Alfonso, Prince of Asturias, Lê Duẩn, Ray Milland, Pujie, and Yoshiko Kawashima. After him are Cesar Romero, Miklós Rózsa, Franz Jägerstätter, Horia Sima, Charles Eames, and Shiro Teshima. Among people deceased in 1995, U Nu ranks 44. Before him are Christian B. Anfinsen, Arturo Benedetti Michelangeli, Aziz Nesin, Rory Gallagher, Roger Zelazny, and Gerald Durrell. After him are Alonzo Church, Lita Grey, Miklós Rózsa, Rose Kennedy, Edda Mussolini, and Ernest Walton.