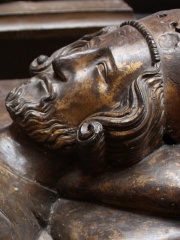 Henry III (1 October 1207 – 16 November 1272), also known as Henry of Winchester, was King of England, Lord of Ireland, and Duke of Aquitaine from 1216 until his death in 1272. The son of King John and Isabella of Angoulême, Henry assumed the throne when he was only nine in the middle of the First Barons' War. Cardinal Guala declared the war against the rebel barons to be a religious crusade and Henry's forces, led by William Marshal, defeated the rebels at the battles of Lincoln and Sandwich in 1217. Read more on Wikipedia

Henry III is most famous for his struggle with Simon de Montfort, Earl of Leicester, in the Second Barons' War.

Page views of Henry III of Englands by language

Among politicians, Henry III of England ranks 683 out of 15,710. Before him are Ladislaus the Posthumous, Boris III of Bulgaria, Kurt Waldheim, Ahab, John Zápolya, and Yaroslav the Wise. After him are Józef Piłsudski, Marwan I, Abd al-Rahman I, Gaius Gracchus, Anne of Brittany, and Abu Sufyan ibn Harb.

Among people born in 1207, Henry III of England ranks 4. Before him are Rumi, Batu Khan, and Elizabeth of Hungary. After him are Henry II, Duke of Brabant, Philip I, Count of Savoy, Mechthild of Magdeburg, and Ottone Visconti. Among people deceased in 1272, Henry III of England ranks 1. After him are Stephen V of Hungary, Richard of Cornwall, Zita, Emperor Go-Saga, Hugh IV, Duke of Burgundy, Enzo of Sardinia, Yaroslav of Tver, Bartholomeus Anglicus, and Henry IV, Duke of Brabant.