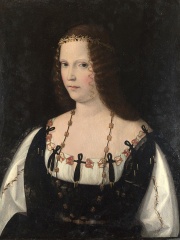 Lucrezia Borgia (Italian pronunciation: [luˈkrɛttsja ˈbɔrdʒa]; Valencian: Lucrècia Borja [luˈkrɛsia ˈbɔɾdʒa]; 18 April 1480 – 24 June 1519) was a Spanish-Italian noblewoman of the House of Borgia who was the daughter of Pope Alexander VI and Vannozza dei Cattanei. She reigned as the Governor of Spoleto, a position usually held by cardinals, in her own right. Her family arranged several marriages for her that advanced their own political position including Giovanni Sforza, Lord of Pesaro and Gradara, Count of Cotignola; Alfonso of Aragon, Duke of Bisceglie and Prince of Salerno; and Alfonso I d'Este, Duke of Ferrara. Read more on Wikipedia

Lucrezia Borgia is most famous for being the daughter of Rodrigo Borgia, who became Pope Alexander VI, and his mistress Vannozza dei Cattanei. She was the sister of Cesare Borgia and Giovanni Borgia, also known as "Juan".

Among noblemen, Lucrezia Borgia ranks 17 out of 842. Before her are Queen Elizabeth The Queen Mother, William the Conqueror, Charles, Prince of Wales, Princess Margaret, Countess of Snowdon, Albert, Prince Consort, and Rudolf, Crown Prince of Austria. After her are Juan Carlos I of Spain, Grand Duchess Anastasia Nikolaevna of Russia, Harold Harefoot, Anne of Austria, Şehzade Mehmed, and Rollo.