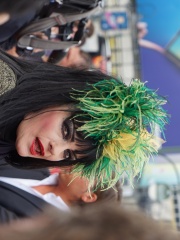 Catharina "Nina" Hagen (German: [ˈniːna ˈhaːɡn̩] (listen); born 11 March 1955) is a German singer, songwriter, and actress. She is known for her theatrical vocals and rose to prominence during the punk and new wave movements in the late 1970s and early 1980s. Born in the former East Berlin, German Democratic Republic, Hagen began her career as an actress when she appeared in several German films alongside her mother Eva-Maria Hagen. Read more on Wikipedia

Nina Hagen is most famous for her work as a singer and actress in the German Democratic Republic (East Germany). She was born in 1955 in East Berlin, which was then part of the Soviet Union.