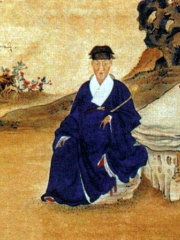 Zheng Keshuang, Prince of Yanping (Chinese: 鄭克塽; 13 August 1670 – 22 September 1707), courtesy name Shihong, art name Huitang, was the third and last ruler of the Kingdom of Tungning in Taiwan in the 17th century. He was the second son of Zheng Jing and a grandson of Koxinga (Zheng Chenggong). Read more on Wikipedia

Since 2007, the English Wikipedia page of Zheng Keshuang has received more than 59,804 page views. His biography is available in 16 different languages on Wikipedia making him the 6,794th most popular politician.

Among politicians, Zheng Keshuang ranks 6,753 out of 14,801. Before him are Thongloun Sisoulith, Clara Campoamor, Al-Aziz Uthman, Giorgio Perlasca, Eberhard III, Duke of Württemberg, and Baibars II. After him are Jaromír, Duke of Bohemia, Tiberius Coruncanius, Louis, Prince of Hesse and by Rhine, Henry XIII, Duke of Bavaria, Anna of Brandenburg, and Laura Chinchilla.