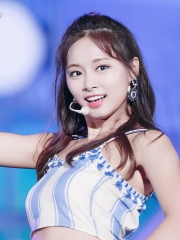 Chou Tzu-yu (周子瑜, born June 14, 1999), known mononymously as Tzuyu (Korean: 쯔위Korean pronunciation: [t͈sɯ.ɥi]; Chinese: 子瑜), is a Taiwanese singer based in South Korea. She is the youngest member of the girl group Twice, formed by JYP Entertainment. Tzuyu is Twice's only member from Taiwan.In 2015, a televised appearance in South Korea in which she was shown holding the flag of the Republic of China (Taiwan) sparked controversy in China. Read more on Wikipedia

Since 2007, the English Wikipedia page of Chou Tzu-yu has received more than 2,561,182 page views. Her biography is available in 24 different languages on Wikipedia making her the 1,734th most popular singer.