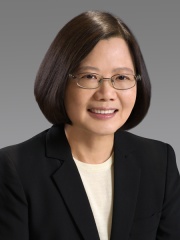 Tsai Ing-wen (born 31 August 1956) is a Taiwanese politician and academic serving as the seventh President of the Republic of China (ROC), since 2016. A member of the Democratic Progressive Party (DPP), Tsai is the first female president of the ROC. She has served as Chair of the DPP since 2020, and previously from 2008 to 2012 and 2014 to 2018. Tsai studied law and international trade, and later became a law professor at Soochow University School of Law and National Chengchi University after earning an LLB from National Taiwan University and an LLM from Cornell Law School. She later studied law at the London School of Economics and Political Science, with her thesis titled "Unfair trade practices and safeguard actions", and was awarded a Ph.D. Read more on Wikipedia

Tsai Ing-wen is most famous for being the first female president of Taiwan.

Among politicians, Tsai Ing-wen ranks 1,439 out of 15,710. Before her are Olybrius, Kayqubad I, Philip of Swabia, Kurt Schuschnigg, Kim Young-sam, and Leo von Caprivi. After her are Alfonso VIII of Castile, James II of Aragon, Viktor Yushchenko, Giuliano de' Medici, Duke of Nemours, Soong Ching-ling, and Seti II.