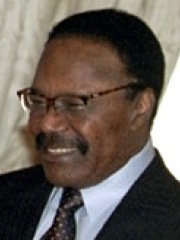 El Hadj Omar Bongo Ondimba (born Albert-Bernard Bongo; 30 December 1935 – 8 June 2009) was a Gabonese politician who was the second President of Gabon for 42 years, from 1967 until his death in 2009. Omar Bongo was promoted to key positions as a young official under Gabon's first President Léon M'ba in the 1960s, before being elected Vice-President in his own right in 1966. Read more on Wikipedia

Omar Bongo was a president of Gabon from 1967 to 2009. He was most famous for his lavish lifestyle, which included owning a private jet and a yacht.

Among politicians, Omar Bongo ranks 2,342 out of 15,710. Before him are Juscelino Kubitschek, Emperor Zhao of Han, Donald Tusk, Ambrogio Spinola, 1st Marquess of Balbases, Nynetjer, and Vojislav Koštunica. After him are Hermann von Salza, Eudokia Makrembolitissa, Barbara of Portugal, Sergo Ordzhonikidze, Adad-nirari III, and Abe no Seimei.

Among POLITICIANS In Gabon