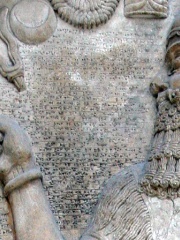 Ashur-nasir-pal II (transliteration: Aššur-nāṣir-apli, meaning "Ashur is guardian of the heir") was king of Assyria from 883 to 859 BC. Ashurnasirpal II succeeded his father, Tukulti-Ninurta II, in 883 BC. During his reign he embarked on a vast program of expansion, first conquering the peoples to the north in Asia Minor as far as Nairi and exacting tribute from Phrygia, then invading Aram (modern Syria) conquering the Aramaeans and Neo-Hittites between the Khabur and the Euphrates Rivers. His harshness prompted a revolt that he crushed decisively in a pitched, two-day battle. According to his monument inscription, while recalling this massacre he says: Their men young and old I took prisoners. Read more on Wikipedia

Ashurnasirpal II was most famous for his military campaigns and the building of the city of Kalhu.

Among politicians, Ashurnasirpal II ranks 1,864 out of 15,710. Before him are Yulia Tymoshenko, Juba II, Rodolfo Graziani, Joseph I of Portugal, Laurent-Désiré Kabila, and Agostinho Neto. After him are Hotepsekhemwy, Tiglath-Pileser I, Archduke Maximilian Francis of Austria, Gurbanguly Berdimuhamedow, Julia Drusilla, and Michael the Brave.

Others Deceased in 854 BC