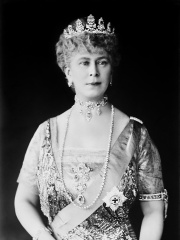 Mary of Teck (Victoria Mary Augusta Louise Olga Pauline Claudine Agnes; 26 May 1867 – 24 March 1953) was Queen of the United Kingdom and the British Dominions, and Empress of India, from 6 May 1910 until 29 January 1936 as the wife of King-Emperor George V. Born and raised in the United Kingdom, Mary was the daughter of Francis, Duke of Teck, a German nobleman, and Princess Mary Adelaide of Cambridge, a granddaughter of King George III and a minor member of the British royal family. She was informally known as "May", after the month of her birth. At the age of 24, she was betrothed to her second cousin once removed Prince Albert Victor, Duke of Clarence and Avondale, the eldest son of the Prince of Wales, but six weeks after the announcement of the engagement, he died unexpectedly during an influenza pandemic. Read more on Wikipedia

Mary of Teck was the wife of King George V and Queen Consort of the United Kingdom and the British Dominions and Empress Consort of India. She was the mother of King Edward VIII, King George VI, and Princess Mary, Duchess of Gloucester.

Page views of Mary of Tecks by language

Among companions, Mary of Teck ranks 81 out of 673. Before her are Hafsa bint Umar, Alexandra Feodorovna, Hecuba, Astrid of Sweden, Gülfem Hatun, and Dinah. After her are Yakov Dzhugashvili, Princess Alice, Duchess of Gloucester, Soraya Esfandiary-Bakhtiary, Carlota of Mexico, Margaret of Austria, Queen of Spain, and Hortense de Beauharnais.