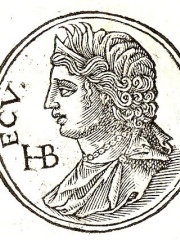 Hecuba (; also Hecabe; Ancient Greek: Ἑκάβη Hekábē, pronounced [hekábɛ:]) was a queen in Greek mythology, the wife of King Priam of Troy during the Trojan War, She had 19 children, who included major characters of Homer's Iliad such as the warriors Hector and Paris, as well as the prophetess Cassandra. Read more on Wikipedia

Page views of Hecubas by language

Among companions, Hecuba ranks 81 out of 687. Before her are Margaret Tudor, Isabella of Aragon, Queen of Portugal, Abbas ibn Abd al-Muttalib, Mary of Teck, Alexandra Feodorovna, and Catherine of Austria, Queen of Portugal. After her are Princess Alice, Duchess of Gloucester, Elisabeth Christine of Brunswick-Wolfenbüttel, Yakov Dzhugashvili, Margaret of Austria, Queen of Spain, Soraya Esfandiary-Bakhtiary, and Isabella of Austria.