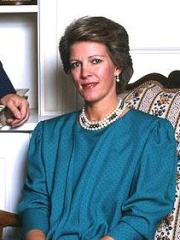 Anne-Marie, (Greek: Άννα-Μαρία pronounced [ana maˈria]; born 30 August 1946) is a Greek and Danish royal who was the last Queen of Greece from 1964 to 1973 as the wife of King Constantine II. The Greek monarchy was abolished with the 1974 Greek Republic Referendum. Born Princess Anne-Marie of Denmark, she is the youngest daughter of King Frederick IX of Denmark and his wife Ingrid of Sweden. In 1964 she married King Constantine and became queen consort of Greece. Read more on Wikipedia

Page views of Queen Anne-Marie of Greeces by language

Among companions, Queen Anne-Marie of Greece ranks 88 out of 673. Before her are Yakov Dzhugashvili, Princess Alice, Duchess of Gloucester, Soraya Esfandiary-Bakhtiary, Carlota of Mexico, Margaret of Austria, Queen of Spain, and Hortense de Beauharnais. After her are Mordred, Josephine of Leuchtenberg, Catherine of Austria, Queen of Portugal, Maria Feodorovna, Brigitte Macron, and Isabella of Austria.