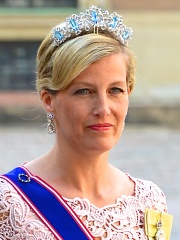 Sophie, Countess of Wessex, (born Sophie Helen Rhys-Jones; 20 January 1965), is a member of the British royal family. She is married to Prince Edward, Earl of Wessex, the youngest son of Queen Elizabeth II and Prince Philip, Duke of Edinburgh. Married in 1999, she worked in public relations until 2002 and now is a full-time working member of the royal family who splits her time between her work in support of the Queen and many of her own charities and organisations. Read more on Wikipedia

Since 2007, the English Wikipedia page of Sophie, Countess of Wessex has received more than 4,603,921 page views. Her biography is available in 39 different languages on Wikipedia making her the 376th most popular companion.

Page views of Sophie, Countess of Wessexes by language

Among companions, Sophie, Countess of Wessex ranks 380 out of 586. Before her are Infanta Maria Francisca of Braganza, Tjuyu, Elizabeth of Carinthia, Queen of Germany, Archduchess Maria Theresa of Austria, Prince Joachim of Prussia, and Princess Ileana of Romania. After her are Maria of Aragon, Queen of Castile, Margaret of Denmark, Queen of Scotland, Catharina of Württemberg, Violant of Aragon, Matilda of Scotland, and Stateira I.