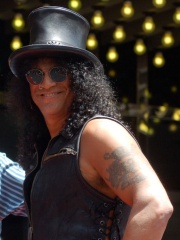 Saul Hudson (born July 23, 1965), better known as Slash, is a British-American musician who is best known as the lead guitarist of the American hard rock band Guns N' Roses, with whom he achieved worldwide success in the late 1980s and early 1990s. Slash has received critical acclaim and is considered one of the greatest guitarists in history.Born in Hampstead, London, Slash moved to Los Angeles with his father when he was five years old. His parents were both active in the entertainment industry; he was given the nickname "Slash" as a child by actor Seymour Cassel. In 1983 he joined the glam metal band Hollywood Rose, then in 1985 he joined Guns N' Roses (which was composed of former members of Hollywood Rose and L.A. Read more on Wikipedia

Slash is a type of fan fiction that takes two characters from a TV show, book, or movie and inserts them into a homosexual relationship.

Page views of Slashes by language