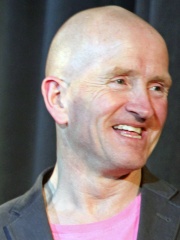 Michael Edwards (born 5 December 1963), known as "Eddie the Eagle", is an English ski-jumper and Olympian who in 1988 became the first competitor since 1928 to represent Great Britain in Olympic ski jumping, finishing last in the 70 m and 90 m events. He held the British ski jumping record from 1988 to 2001. Read more on Wikipedia

Since 2007, the English Wikipedia page of Eddie the Eagle has received more than 1,898,065 page views. His biography is available in 23 different languages on Wikipedia making him the 392nd most popular singer.

Page views of Eddie the Eagles by language

Among singers, Eddie the Eagle ranks 393 out of 3,001. Before him are Ronnie Biggs, Lepa Brena, Sacha Distel, Rubén Blades, Malcolm McLaren, and R. Kelly. After him are Serhat, Lee Hazlewood, Dino Merlin, Ghena Dimitrova, Miley Cyrus, and Leyla Gencer.