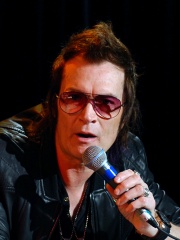 Glenn Hughes (born 21 August 1952) is an English rock bassist and vocalist, best known for playing bass and performing vocals for funk rock pioneers Trapeze, the Mk. III and IV line-ups of Deep Purple, as well as briefly fronting Black Sabbath in the mid-1980s. Hughes is also known by fans as "The Voice of Rock" due to his soulful and wide-ranging singing voice.In addition to being an active session musician, Hughes also maintains a notable solo career. Read more on Wikipedia

Since 2007, the English Wikipedia page of Glenn Hughes has received more than 1,227,880 page views. His biography is available in 31 different languages on Wikipedia making him the 243rd most popular singer.