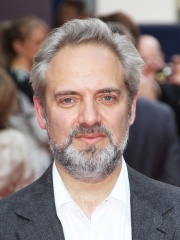 Sir Samuel Alexander Mendes (born 1 August 1965) is a British film and stage director, producer, and screenwriter. In 2000, Mendes was appointed a CBE for his services to drama, and he was knighted in the 2020 New Years Honours List. That same year, he was awarded the Shakespeare Prize by the Alfred Toepfer Foundation in Hamburg, Germany. Read more on Wikipedia

Among people born in 1965, Sam Mendes ranks 40. Before him are Sophie, Countess of Wessex, Nicholas Sparks, Michael Bay, Vinnie Jones, Infanta Cristina of Spain, and Scottie Pippen. After him are Connie Nielsen, Uğur Şahin, Katarina Witt, The Undertaker, Jean Castex, and Aamir Khan.