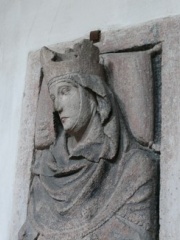 Emma of Altdorf, also known as Hemma (c.  803 – 31 January 876), a member of the Elder House of Welf, was Queen consort of East Francia by marriage to King Louis the German, from 843 until her death. Read more on Wikipedia

Page views of Hemmas by language

Among companions, Hemma ranks 404 out of 687. Before her are Prince Joachim of Prussia, Gunilla Bielke, Natalia Sedova, Berengaria of Barcelona, Wild Bill Hickok, and Domitilla the Elder. After her are Amalia of Solms-Braunfels, Anne de Pisseleu d'Heilly, Elizabeth de Burgh, Louise of Mecklenburg-Güstrow, Infanta Antónia of Portugal, and Isabella of Castile, Queen of Aragon.

Among people born in 800, Hemma ranks 20. Before her are Pribina, Piast the Wheelwright, Al-Muqanna, Omurtag of Bulgaria, George Syncellus, and Thyra. After her are Ratchis, Jayavarman II, Khaydhar ibn Kawus al-Afshin, Mauregatus of Asturias, Giustiniano Participazio, and Himiltrude. Among people deceased in 876, Hemma ranks 4. Before her are Björn Ironside, Louis the German, and Kocel. After her is Conrad II, Duke of Transjurane Burgundy.

Among companions born in Germany, Hemma ranks 61. Before her are Stephanie of Hohenzollern-Sigmaringen (1837), Charlotte Christine of Brunswick-Wolfenbüttel (1694), Princess Vilhelmine Marie of Denmark (1808), Elizabeth of Carinthia, Queen of Germany (1262), Dagmar of Bohemia (1186), and Prince Joachim of Prussia (1890). After her are Amalia of Solms-Braunfels (1602), Louise of Mecklenburg-Güstrow (1667), Duchess Marie Gabrielle in Bavaria (1878), Duchess Charlotte Frederica of Mecklenburg-Schwerin (1784), Polyxena of Hesse-Rotenburg (1706), and Anna Maria of the Palatinate (1561).